Two complementary updates have popped up from OngCDH and our friends. The first extends the functionality of the The Mirador LDN Plugin to include more object types and the second is a new interface on the Rerum Inbox website which makes it easier for anyone to post supplemental content for public IIIF Manifests.

This wonderful contribution to the Mirador community from Jeffrey C. Witt has been on github since July 2017 and accomplishes the simple task of supplementing IIIF Manifest objects with additional information available from Linked Data Notification (LDN) inboxes listed in the Manifests or hosted as a Rerum Inbox.

It was originally created with Tables of Contents in mind and has continually been updated to support the sorts of sc:Ranges objects that make up ToCs and other structures within Manifests. In this way, a scholar (or organization) who has created content that supplements a Manifest to which she has no access (for example, one hosted at a national library) can enhance the available information without imposing on or mirroring the original object in its hosting repository.

The plugin creates a simple UI (above) for exposing to the user when an Announcement is available for the resource loaded into the window and prompting to include it as part of the working object. Having proven itself with Range objects, the next step was to include annotations.

Annotations in IIIF follow the Web Annotation and IIIF Presentation standards. Within IIIF (and Mirador), each sc:Canvas may have an otherContent property that contains an array of sc:AnnotationList objects. Related lists are aggregated into sc:Layer objects which span entire Manifests. These Layers are used for commentary or transcription and are often not part of the Manifests hosted by large institutions, as it is more common that they are the result of research than cataloguing or digitization activities.

As of 20 February 2018, the plugin detects and renders announcements of the types sc:Layer and sc:AnnotationList in addition to the sc:Ranges type previously supported. IIIF Presentation 3.0 objects, such as `as:OrderedCollection` and  `as:OrderedCollectionPage`, are allowed by the Inbox, but have not yet been integrated into the plugin for rendering in Mirador. Moving forward, additional cases for supplementary metadata, canvas images, and publication and review will be considered. Visit the plugin on github to contribute stories or code.

Linked Data Notifications are useless without somewhere to announce them, so the Walter J. Ong, S.J. Center for Digital Humanities created the Rerum Inbox and offer it free to the world as a place to post and retrieve notifications about any resource, even if it doesn’t declare the service itself. Since August 2017, Rerum Inbox has been accepting notifications through direct HTTP Requests. The website provided the specification and explained the purpose, but otherwise had not been terribly useful.

Now there are two simple interfaces provided for anyone who wishes to explore Linked Data Notifications in the Rerum Inbox without reaching for the command line. The first discovers if the provided resource is targeted by any notifications. Of course IIIF Drag ‘n Drop

is supported, and in truth it is just a UI on the inbox.rerum.io/messages endpoint. We are a long way from critical mass, so it is unlikely a randomly selected resource will have results, but it is a simple way to be reassured that your notification made it in okay.

If you have just a couple resources to supplement, there is a quick tool on the site to leave a notification without much fuss. Provide the target (a dereferenceable URI will be verified), the actor (if the URI of the person or organization does not reference a label, you may provide one), and the object itself (with a dereferenceable URI, other preferred fields will be filled out automatically) and click “submit” to post a new announcement. For simplicity, this interface creates only default notifications of the type Announce and the motivation supplementing, so if you need something else, you’ll still have to do it yourself. 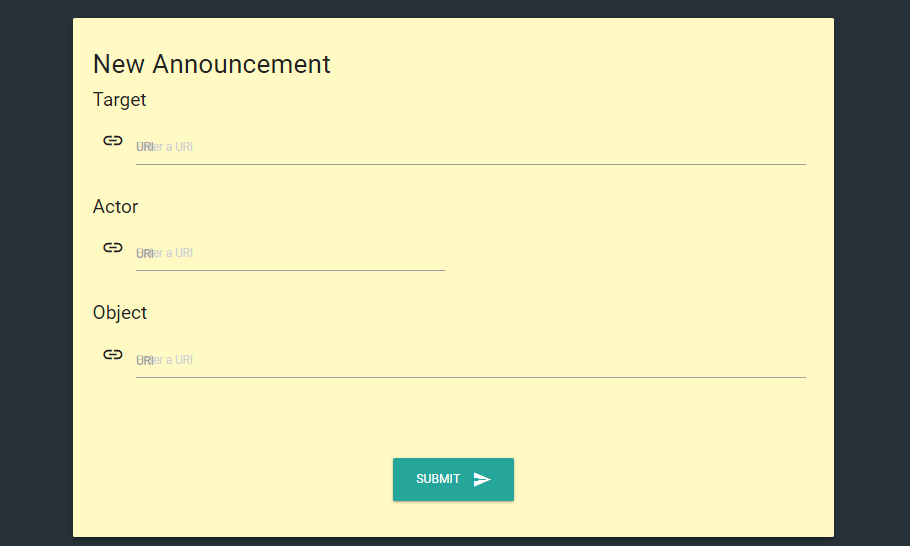 With these two updates, we hope to increase the use of both the Rerum Inbox and the contributions to these projects by the communities they serve. If you have suggestions about how to improve either of these offerings, please leave a comment below or visit their respective github repositories to leave an issue or pull request.

One reply on “Mirador and Rerum Inbox: Improving the LDN Plugin”

Our conversations have included support for alternative images on canvases, ranges that suggest reorderings or cross-document collections instead of just table of content supplements, discovery aids, and reporting technical errors in manifests relating to delivery or syntax.

What should I spend my time on next? What would you use?